These are the Weapons in Dusk. Weapons are found in both obvious locations and in secret ones as the player progresses through the game.

The cigar is a slow health recovery item. By default, it can be accessed by pressing "0" on a keyboard's number row. Like the sickles, it's an item the player starts with. It's the weapon with the highest zoom

The sickles are a pair of rusted tools and the player's starting weapons in Dusk (along with the cigar). They are found and equipped imminently upon gaining control of your character in E1M1. The sickles can reflect enemy projectiles with well-timed swings. The player can equip and instantly use them using the quick melee button. (Regular weapon switching also works.) Sickles do triple damage when their user is intoxicated.

The sword is a powerful melee weapon which will take the same weapon slot as the sickles when found. It is often found in secrets. If the player has 100 or more health, they can use the sword for a stab attack (the attack button must be held until it is charged up, then released to strike) that deals much greater damage than a regular swing. If the player has more than 50 morale, they can hold the zoom button to block attacks with the sword, with each blocked attack reducing morale by 1. Blocked projectiles are reflected with a damage bonus in the direction the player is aiming.

The pistol is the first weapon the player is likely to find (aside from the sickles). After picking up a second one, pistols can be dual-wielded. This greatly reduces precision but provides a small fire rate increase and removes trigger pull delay. Pistol ammo is plentiful in the campaign.

The lever action shotguns are some of the most common weapons in the game. They're useful for weaker enemies, taking many tier 1 enemies down in a couple blasts. They stay relevant in the presence of the super shotgun by having a far tighter spread and the capability to be dual-wielded like the pistols. Dual wielding shotguns does not decrease precision, meaning that wielding two of them is always better than wielding only one.

The super shotgun is one of the most powerful weapons in the game. It feeds from the same ammunition pool as the lever shotguns, however it uses 2 shells per shot. Though it has a slow rate of fire, it will kill most foes in 2 point-blank shots or less, and also has a very wide spread, which makes it able to kill multiple weaker enemies at once.

The assault rifle is a powerful automatic weapon with a moderate rate of fire. Its shots are perfectly accurate when tap-firing. Useful for chipping heavy foes down from a distance, handling crowds of small enemies, and dealing damage rapidly at close range.

The hunting rifle is a high-damage precision rifle with a powerful zoom (despite the lack of a scope). It packs a low ammo pool, but it's a devastatingly strong weapon. The hunting rifle actually fires two hitscan projectiles. Both combined kill a target- or if the target dies from the one projectile- the second will go through, often killing the other enemy behind.

A magic crossbow that fires green bolts. These bolts do good damage, but the greatest feature is their magic piercing capabilities. The bolts go right through enemies, props, and even walls like they were paper, allowing for huge multi-kills and kills through walls as well as the ability to trigger shootable buttons. It also pushes the user back when shot, making it useful for higher jumps.

The mortar fires arcing projectiles that explode when activated by the zoom button (right mouse by default), after 5 seconds pass, or when coming into contact with an enemy. It has a large ammo pool, is easy to use and deals high damage. The user's forward speed is added to launched grenades, making them travel faster and farther if shot by a player running forward. Strafing and backwards player movement do not affect the grenades. Explosions can be used to jump high.

The riveter is the biggest gun of them all. The riveter acts like an extremely powerful rocket launcher, firing explosive projectiles that explode on impact and deal extra damage on a direct hit. Explosions can be used to jump high.

Other means of damaging enemies[]

The player can press the "flip" key ("R" by default) to spin their currently equipped weapon. Doing so with most weapons works as a melee attack that deals 10 points of damage to enemies and doesn't seem to have an attack cooldown. This melee attack has a shorter reach than both the sword and the sickles.

The cigar, the sickles, the sword, the super shotgun and the crossbow cannot be used for this attack. Flipping these weapons has no effect on enemies. 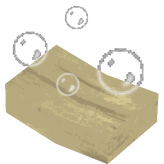 Some heavier objects thrown by the player deal damage on contact with enemies. Objects with moderate weight (such as small boulders) usually deal 500 damage, while very heavy objects (such as metal boxes) deal 1000. In addition, some explosive items may set enemies or other objects on fire, and some may explode on impact, dealing 300 damage in a radius.

Soap bars are special among throwable objects, as they deal 1,000,000,000 damage on contact with enemies[1] (despite being rather light objects), meaning that they can destroy whatever they are thrown at instantly. Each level in the game has a single bar of soap hidden in it.

All explosions deal 300 damage to enemies within radius. (Some bosses, however, are immune to explosion damage that is not caused directly by player projectiles.)

Proximity of burning objects can light enemies on fire, from which some enemies (such as possessed scarecrows) take more damage than others.

Some map hazards can also be utilized when fighting enemies.

Mama is immune to explosions caused by barrels and gas cans.

Enemies may damage each other, and sometimes even themselves. Most enemies will be aggravated when they are hit by another enemy and will deliberately begin attacking whichever entity happened to damage them most recently. Enemies under the effect of a Crystal of Madness will also default to attacking monsters, rather than the player, however, they can still be aggravated in this state by player damage. It's also worth noting that the crystals don't achieve their effect if the enemies within their range are not yet awake, which might be caused by a bug.

Some enemies (such as The Duke Brothers) will refrain from infighting, and some others (such as Mama) are immune to self-damage.

The damage monsters do to each other differs from the damage they do to the player, often resulting in them being able to kill each other in just a few hits, or even instantly.

Projectiles deflected by the player's melee weapons appear to deal twice as much damage to enemies as they would normally do in infighting.