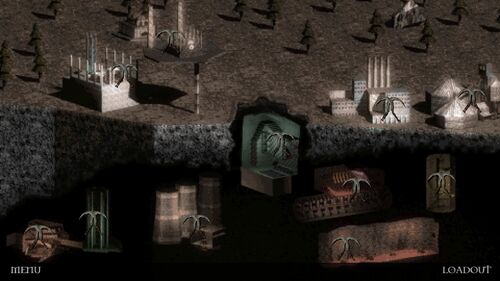 The Facilities is the second episode in DUSK. It features 11 levels (10 normal, 1 secret.). All the levels were mainly designed by the games creator, David Szymanski. Each level has a distinct setting but a shared theme across the episode, military complexes or heavy industrial zones, with the exception of E2M9 and E2M10, which are set in excavated Ruins.

After defeating The Experiments and leaving through the former holding tunnel, the Treasure Hunter has seemingly lost all of his weapons (apart from the signature sickles) and found their way to Dusk's Grainery (E2M1). Fighting through it to its underground electrical systems (E2M2), he discovers they lead to an adjacent factory (E2M3), repurposed to hold a massive "Thresher" that the city's population was fed into. The player battles through the vast underground machine (E2M4) feeding the tons of meat slurry to a military controlled laboratory with the laws of physics bent like a knot (E2M5) and cyclopean power plant splitting open the crust of the earth (E2M6). After leaving the premises and defeating Big John, the only other sane human seen in the game, you venture up to a mysterious factory in the sky (E2M7), and a strange altar (E2M8), finally leading into Lovecraftian Ruins (E2M9), defeating the giant reptilian undead Guardian (E2M10) to allow passage into the blood and-bone-fueled teleporter to the third and final episode of DUSK, The Nameless City.

The Facilities reveals that after the Military, and the scientists having found various Lovecraft-esque ruins under the town of Dusk and have committed a "Faustian Deal" in exchange for the Ruins' Knowledge which lead to the town being sealed, and the protagonist arriving for treasure at the start of the story. 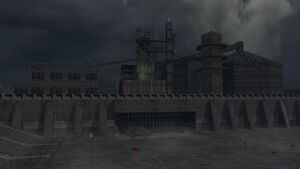 The underground electrical utilities and tunnels of the Grainery, sitting atop of mysterious ruins. Don't go in them. 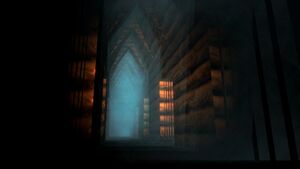 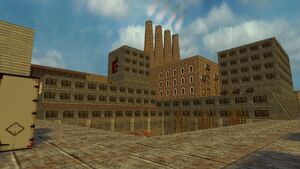 A huge underground network of mysterious machines that hack blood and bone. 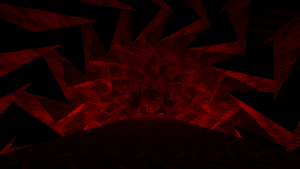 A deep underground foundry powered by lava connecting to a mine system. (The secret level of episode 2.) 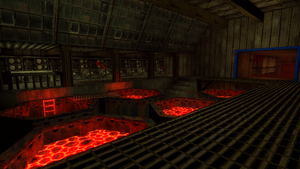 An underground laboratory where reality bending experiments are being performed. 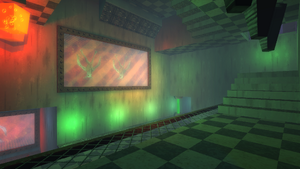 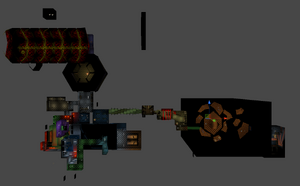 A vast and open facility containing a powerful reactor which has begun to tear open the earth. 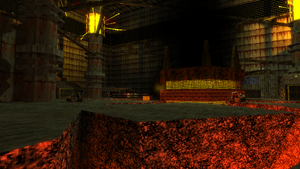 A scientific facility in the sky which serves a mysterious purpose. 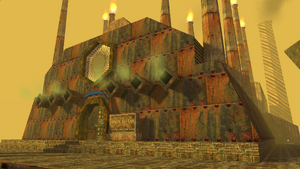 A facility made to house and harvest the power of the concrete altars. 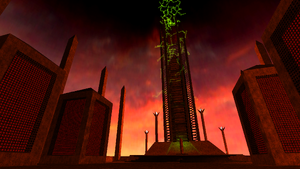 A mining operation to enter and exploit the secrets of the ruins. 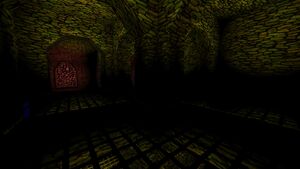 Heavily protected Ruins of Blood and Bone, containing a one way teleporter to The Nameless City. 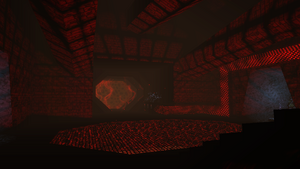 The Facilities has much more continuity in design than The Foothills, telling a much bigger story. After building the wall to keep rural Dusk from the city, the scientists discover old ruins with ancient rituals written in them. They discover a ritual that requires several tons of blood and bone each to initiate, and use their new servants in conjunction with agents from the cult to shepherd the population of a city into the Threshing Machine. The fleshy soup is ported to the Escher Labs, where scientists initiate rituals to bend time and space, make nearly-indestructible machine servants (the cowgirls), and start making another research facility in the lower atmosphere using the antigravity rings they created. To do this, they build a massive underground reactor making industrial quantities of antigravity tech that splits open the crust of the earth, and stripping a now-empty and dead city of skyscrapers for building material. Their new Skylab, Neobabel, starts constructing the warehouse-sized altar on top of ancient ruins older than humanity. Once the altar is completed, they create a Guardian of flesh and bone and a portal to The Nameless City, constantly fed with the liquefied bodies of millions.