After going through the majority of the level, the player will come across a teleporter that leads to a short drop. Upon dropping down and moving towards the exit, Son of Intoxigator appears. Duskdude will comment, "Oh come on" at the sight of Intoxigator's son and the fight will commence.

Son of Intoxigator has 8000 health, making him a bit more tanky than his father. Son of Intoxigator's behavior is identical to that of Intoxigator, but with increased speed, fire rate, and projectile speed. The closeness of E2M9's arena combined with the Son's spread can make the fight a bit more difficult. Like most bosses, the Son is weak to weapons that deal high damage such as the Mortar and Riveter. Utilizing the Sword to deflect the Son's acid projectiles is also a viable option when fighting him. The arena itself can be used as cover to cancel the Son's attacks if timed correctly, or a button in the arena can be pressed to open up the walls and reveal The Twins, which may cause infighting. 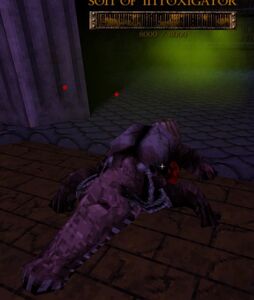