Rats are enemies in DUSK. They make their first major appearance in E1M2: Down on the Farm, though they appear throughout the game.

Simply put, the rats appear as possessed rats covered in blood. Their eyes glow green, which may suggest Cultist influences were used on them. In E3MS: The Ratacombs, a single large rat dubbed One As Many appears to command or coexist with the smaller rats.

Rats most commonly appear in groups throughout the levels they are in. Where there is one rat, other rats are usually not far behind. When a rat spots the player, it will squeak and begin to move along the ground at a moderate pace. Rats are incredibly weak enemies, though they can be dangerous on the Duskmare difficulty. Their scuttle can be heard when they move, making them easier to find.

Since rats have a low health pool of 50hp, it only takes two Pistol shots to take one down. For large groups of rats, weapons with a large area denial such as the Mortar are ideal. The Assault Rifle is also useful for taking out large groups of rats, as is the Sword for one-on-one encounters. 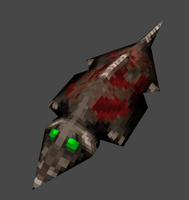