Mama is the first boss of the Episode 2: The Facilities, appearing on a laputa in E2M5: The Escher Labs. She is the first and original Cowgirl, with the same attack pattern and animations but significantly scaled up relative to them, with six times as much health and visibly twice as large. She initially rests in a hollow grain silo, which the player needs to get inside to grab the blue key.

For the Mama encounter, the player should be equipped with Riveter, the highest-damage weapon in the game. One rivet damages for 500 HP (300 direct+200 splash), so she should fall fairly quickly (12 direct hits). However, she can usually insta-kill you if you let her shoot you with a salvo of her "rockets". Additionally, strafing or finding cover the might be a problem due to the landscape you are fighting on. The best terrain option for this boss is leading her around the container where she was held. It can serve as a good cover and whenever she moves to a firing stance, as you are free to shoot 1-2 rivets from Riveter and continue running. Be sure to watch out for splash damage from both you and her. Mama is pretty slow, so you shouldn't have any problems outrunning her.

Alternatively, she goes down pretty easily with a charged sword if you have it from the secret at the end of the spiral hallway earlier in the level (it's on the right, with a mismatched texture). 7 hits are necessary and the long reach of the charged sword in combination with the aforementioned circling around the silo makes this strategy surprisingly easy.

Her arena is littered with exploding barrels. You can place some at the door to her room before the fight. These barrels will ignite her, causing Mama to take fire damage over time (burn damage takes five minutes to kill her at 10 HP/second). You can also kill her without opening door using the crossbow if you hit every shot and you have full ammo.

If you are quick enough, you can grab the blue key from behind her, run and open the exit, then simply wait for the fire to kill her. You can also fight her from the exit hallway, provided you duck away when she prepares to attack. As with all bosses in DUSK except the final one, there is no need to kill Mama and you can avoid combat entirely by grabbing the key and running to the blue door, moving on to the next area. 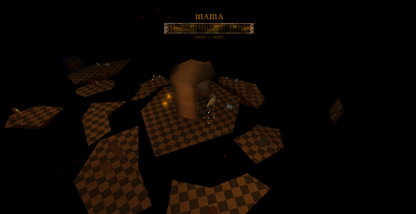 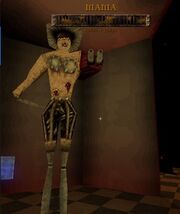 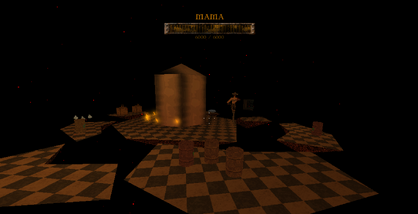