Jakob also known as the Cult Leader, is the penultimate boss encountered in The Nameless City, and the secondary antagonist in the game. His voice can be heard throughout the game as he taunts the player. He appears exclusively in E3M10: Dusk and serves as one of two bosses in the level. Jakob is the leader of The Cult and is apparently omniscient. Jakob's boss theme is Keepers of the Gate.

He appears as a man with black hair, brown eyes with bloody bags, white skin, and the Cult symbol on his forehead. He is dressed in a brown coat, grey pants, and brandishes a Super Shotgun. His eyelids appear to have been cut off, as shown by the bulging eyes and blood surrounding them.

Upon starting E3M10, Jakob will say to the player, "We're waiting." After successfully activating the portal and gearing up, the player will be teleported to an arena where Jakob stands at the opposite end, his back turned and surrounded by a forcefield of green energy. He then makes a short speech to the player: "At last... you've finally arrived. You shall be my final test." Once he is finished, the boss battle begins. If the player shoots Jakob with the Crossbow through the energy field, Jakob immediately cancels his dialogue and begins the boss fight.

Jakob moves very fast compared to other bosses before him. He moves around the arena by bunny hopping, which can make him difficult to hit at times. Jakob is also capable of switching between different weapons, being the Shotguns, Assault Rifle, Mortar, and Riveter. Jakob's attacks, combined with his speed and 5500 health, make him a formidable opponent.

Jakob has several different attacks. These include:

Jakob's attack pattern is completely random, though he uses different weapons depending on proximity to the player.

Playing against Jakob is similar to playing against an opponent in Duskworld, with the exception of the boosted health, differing attack patterns, and a lack of hitscan damage. The main trick to beating Jakob is to move at the same pace that he does. Bunny hopping and strafe jumping will allow the player to dodge most of his attacks, however this must be done continuously throughout the fight in order to have an advantage. If using explosive weapons, prediction is key to landing a successful hit. Strong weapons like the Riveter and Mortar will deplete Jakob's health quickly, however ammo will be used up quickly if the player is not careful.

Upon lowering Jakob's health to 500, six Cultists will appear and start throwing fireballs at him while muttering "Unworthy..." to finish him off. Jakob will yell out to his traitorous disciples and attempt to shoot back at them, but ultimately fails. After killing him, both Jakob and the Cultists will explode into a shower of gibs. With Jakob defeated and the cult vanquished, the stairway to Nyarlathotep's arena opens. 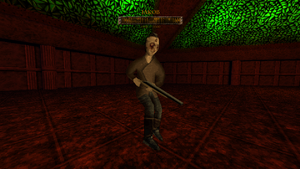 Jakob's voice is heard throughout multiple levels in the game, where he either taunts the player or gives hints to the story:

Jakob's laughter can be heard multiple times throughout the game as well.