The Guardian is a boss encountered in The Facilities. It appears in E2M10: The Gauntlet and serves as the final boss of the second chapter. The Guardian appears as a tall, muscular, reptilian humanoid with a mortar launcher replacing its right arm. It's boss theme is Hand Cannon.

Upon completing the previous level, the player will appear in a small room with a large gate and two teleporters. Upon walking through the teleporter a short distance into one of the rooms, the Guardian will spawn and begin the boss battle.

The Guardian has 17000 HP, making it one of the higher health bosses in the game. The Guardian's primary attack consists of rapidly firing bursts of Mortar grenades, up to five at a time. The closed-off corridors of the level make this especially dangerous, as the grenades can quickly catch up to the player. Like all bosses, weapons that deal high damage such as the Riveter and Hunting Rifle are ideal for fighting the Guardian. Luring the Guardian through a teleporter can help make the fight slightly easier, however the starting room is still small to a degree.

There are two alternative methods that can be used to complete the level instead of outright slaying the Guardian. The first method is to use the Crossbow to hit each switch necessary to open the gate without stepping forward enough to spawn the Guardian. This requires a knowledge of where the switches are, however it is done fairly easily. The second method is to telefrag the Guardian by attempting to teleport over it. The Guardian will need to be lured through the teleporter multiple times in order to complete this successfully. Killing the Guardian with a telefrag awards players the Telefragged achievement. 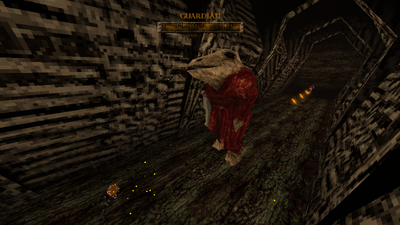 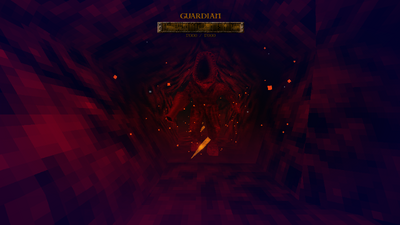