Dusk Wiki
Register
Don't have an account?
Sign In
Advertisement
in: DUSK, Enemies, The Facilities, The Nameless City

The Grand Wizards, known unofficially as Duke Mages are a variant of The Duke Brothers bosses from the first episode, having much less health and smaller in size.

Their attacks still maintain their homing capability and damage. The Duke Mage has a greatly increased health pool than the regular Mage, at 700hp compared to a regular Mage at 180hp. They will often be found fighting alongside other Cult members, and sometimes the Military. While not a threat most times if tracked properly, when combined with other enemies the Duke Mage can easily kill an unaware or unskilled player. Their attacks can be directed into walls, floors, or even other enemies.

The first pair of these is encountered at the end of the E2M1, when the mysterious voice says "Where do you think you're going?". They are later encountered often throughout Episode 2. 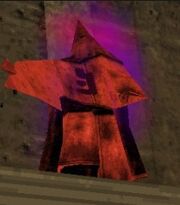