This map has NO keys present, and like E1M1: Head Cheese, it consists of a simple Point A - Point B system. Immediately after spawning, Jakob will ask: "Are you prepared for what's next?" The starting area is straightforward with few health items and munitions. A switch directly ahead of the spawn will open up the rest of the map, which is located down the stairs. The next room is small but has a door locked with a button-"code." The two middle buttons will unlock this door. Beyond it lies the main area of the map, where the episodic bossfight will take place. To the right of the massive cage is a button which will unlock the control room which lies underneath the staircase. The button inside of this room is what will reveal the boss. After defeating Experiment, one can safely approach the 6 buttons present in their cage; however as soon as any button is pressed, a hidden wall will drop, revealing the Second Experiment to fight. Once they are defeated, the player is free to enter the dark passageway that is revealed by the Second Experiment. Going here will trigger a voiceline by Jakob: "This... is only the beginning," before fading to black.

Other Places of Interest[] 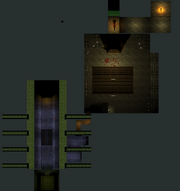