The Bone Monk is an enemy encountered in The Nameless City. It makes its first appearance in E3M2: Fire and Ice and can be found in most levels that follow.

Bone Monks resemble horned human skeletons missing lower legs. They are dressed in blue, blood-stained robes and are capable of flight. A blue glow surrounds them, adding to their demonic appearance.

When spotting a player, Bone Monks will curse at the player in an unknown language before attacking. Their main method of attack is throwing fireballs that they seem to cast with their hands. The fireballs that Bone Monks throw are much faster than average Cultist fireballs and deal more damage as well. However, they have a relatively low health pool of 275hp, making them glass cannons. Since Bone Monks almost always fly out of the player's reach, using the Hunting Rifle is recommended for taking them down. Similar ranged weapons like the Crossbow and Assault Rifle can easily dispatch them. 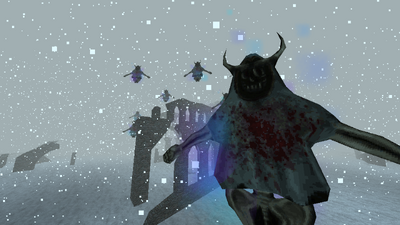