Difference between revisions of "Black Phillip"

This article is a stub. You can help Dusk Wiki by expanding it. 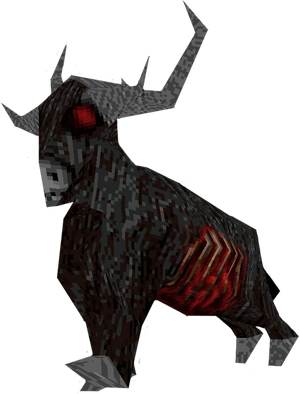 Black Phillips are enemies that commonly appear in Episode 1: The Foothills, Episode 3: The Nameless City and in some secret areas in Episode 2: The Facilities. They first appear in E1M1: Head Cheese.

They appear to resemble possessed or mutated goats, sporting long spindly horns, an exposed ribcage and innards, and glowing red eyes. They make a groaning sound upon being alerted or spotting the player, and make galloping noises while navigating and moving around the levels. They are often found outdoors, and in secret areas, sometimes seemingly having been tied up to fence posts and the like.

Black Phillips constantly move around the level, more or less in the player's direction, in zig-zag patterns. They periodically fire a fast projectile, which somewhat resembles like blood, towards the player. Compared to other enemies in the game, they do not have much health, nor do they do much damage with their projectile attacks. Still, Black Phillips can overwhelm the player in greater numbers, and their swift damage along with other enemies can prove a nuisance to an uncareful or unaware player. They are some of the faster enemies in the game, especially early on.